The TennisLink page for the 2020 tournament is https://tennislink.usta.com/tournaments/TournamentHome/Tournament.aspx?T=235819.

Refund of Entry Fee if Withdrawing from the Tournament
No entry fee is charged if a player withdraws before entries close. By USTA rule, no refund is guaranteed after entries close.

Important Form to Submit Before Traveling to the Tournament

USTA Medical/Media Release Form:
No player will be allowed to start a match without this form, signed by a parent or legal guardian, on file with the Tournament Committee. You may download it and fill it out prior to the tournament and e-mail it to Eric Stephens at lakewood10s@gmail.com.

If you are not selected for the 18s, you will be considered for the 16s division. This is an important thing to consider before entering. If you enter two divisions and are not accepted into the older division, you can only be considered for main draw and alternate status in the younger division.  Although you can enter two divisions, you cannot play in two divisions in the Nationals. You will be selected for one division only, and if you plan to enter doubles, you must play in the age division of your singles entry with an eligible partner. In other words, you cannot play singles in the Girls' 16s and doubles in the 18s.

The National Standing List used for player selection will be the list published on June 17, 2020 which includes tournament results from March 19, 2019 - March 18, 2020. 8 wild card spots will be available. Player Selections will take place immediately after the entry deadline and will be completed no later than Tuesday, July 21.

​
Wild Cards
If you are not endorsed by your Section and/or have other issues that keep you from being selected into the event, you may apply for a Wild Card entry. Up to 8 Wild Cards may be granted for the Nationals in the 18s.

All applicants must be eligible to enter a USTA National Championship, be in good standing with their Sectional Association, and may not be under suspension by the USTA.  Wild card consideration is given to players who were unable to meet their section’s requirements for endorsement to USTA National Championships .  Applicants are not required to submit timely entries into the tournament to be considered for a wild card.

Once the application deadline has passed, the USTA will confirm that the applicant is in good standing with her Sectional Association. Shortly thereafter, the Wild Card Committee will meet to determine the wild card recipients.  Only those players selected to receive wild cards will be notified.

(After the selection process is complete) All players must e-mail Eric Stephens at lakewood10s@gmail.com to confirm their doubles partners. Even if you selected a partner during tournament registration, we still want an e-mail from each player to verify their partner. Players must submit doubles pairing by August 6. Last-minute changes will only be accepted for last-minute alternates and withdrawals. Per USTA rules, the tournament staff cannot give our player/parent contact information. Players wishing to contact another player can do so by lakewood10s@gmail.com or use the Match Tennis App. 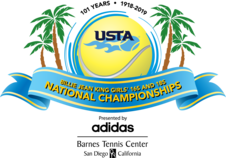