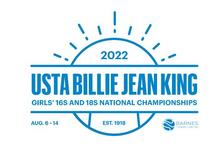 All About the
USTA Girls’ 18 & 16 National Championships

The United States Tennis Association (USTA) Girls’ 18 & 16 National Championships are the premiere hard court tennis tournaments for amateur and professional American girls aged 16 and 18 and under in the United States.  Beginning in 2010, the age groups were combined and played at the same site - the Barnes Tennis Center in San Diego. At stake in these Championships is the title of National Champion, and with it a Wild Card entry into the main draw of the US Open Women’s Championships (for the 18s Champion) and a Wild Card into the US Open Junior Championships (for the 16s Champion).

In addition to crowning the National Champions, the tournament awards the Maureen Connolly Brinker trophy to the most outstanding player for the season.  Sponsored by the Maureen Connolly Brinker Foundation and named after San Diego’s “Little Mo,” the first woman to win a Grand Slam, the honor encompasses not only quality of play, but sportsmanship and competitive spirit.  USTA Sportsmanship, The Molden Family, and Jean Krem Award for Sportsmanship trophies are also presented.

Unlike many tennis tournaments, the girls who play The Nationals have been endorsed to be here by their USTA Sections, have received wild cards from the USTA, or are the winners of their Sectional Championships. The competitors in The Nationals are the cream of the crop, the most outstanding performers of last year. Truly, the future of American tennis will be on the courts at the Barnes Tennis Center, San Diego, in August.

The competition at the Nationals is far superior to that of any of the other national-caliber championships held during the year.  It is often a graduating senior’s last opportunity to compete in the juniors or even win a national championship.  It is also a last opportunity for these girls and their families to spend time together before their junior careers give way to college or professional tennis.  An outstanding performance by an athlete can mean the difference between getting one’s first or second choice of colleges to attend.  Alternatively, for younger players, a come-out-of-nowhere result can open up the opportunity to travel nationally and internationally during the following year.  The Nationals often pit the top US players against each other for the first time during the year, as international and professional play does not give them this opportunity.  These factors all contribute to create an atmosphere of excitement, friendship, anxiety, sportsmanship, competitive spirit, and produce a terrific week of tennis!

The top finishers at The 2022 USTA National Championships will receive 2022 US Open wildcards as listed below:

*Players must be age eligible according to ITF rules to accept ITF Junior Wild Cards.​